Advancing to the next level 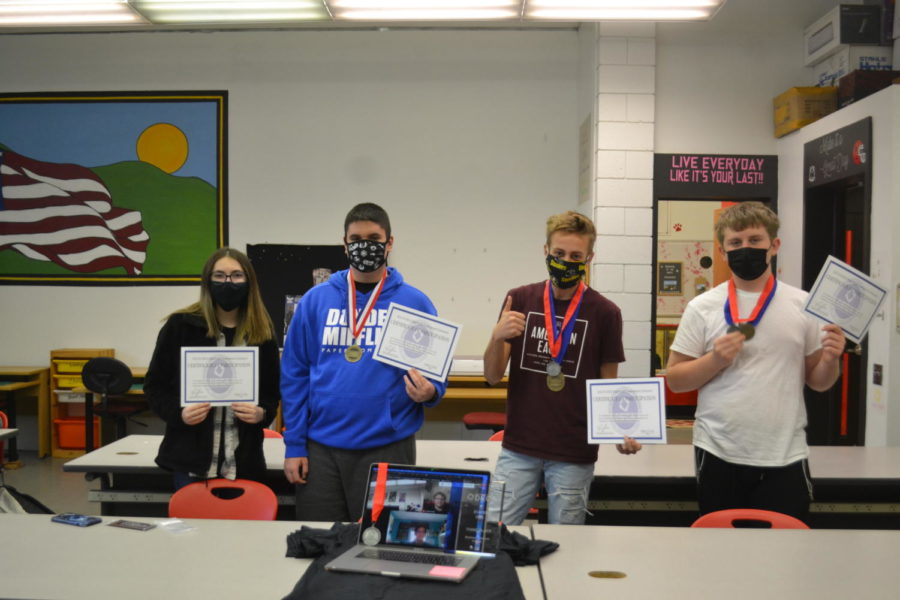 After a little bit over a month of preparation, 15 DECA students advanced from Districts to the State Competition in their respective categories. While these students were looking forward to packing up their bags and making a quick trip out to Hershey, Pa., a slight setback came in between. Due to COVID-19, both Districts and the state competition were held virtually this year. These 15 students took on the challenge from their very own backyards.

“A big part of DECA is business professional presentations, so not being able to have the face-to-face element of the presentation was challenging,” junior Braeden Geibel said.

Competing at Districts back in December, sophomores Luke Snavely, Connor Tavern, Brandi Bonzo, Erica Rosa, junior Sarah Levenson and senior Sunny Taylor all qualified to advance at states, but many other students had to create written manuals to be able to compete at states.

While many dream of traveling to Hershey to compete, this year was a little bit out of the ordinary. Instead of being in person, these students competed virtually among 4,000 other high school students from around the state of Pennsylvania. They had to complete a written test and had to record a video role-play for the respective categories.

“The only challenge I faced was talking for a recording. When you do the roleplays in person, the huge interacts with you and asks you questions that keep the conversation flow going. When you’re just recording without a judge you have to make sure to keep things going,”  senior Sunny Taylor said.

While competing virtually is different than competing in-person, there are many other events that take place over the course of States. DECA students look forward to these events and meeting new people from around the state that share the same interests as them in the business field.

“I’m kinda [sic] bummed out that we didn’t get to travel this year. Some of the things I really missed was the DECA dance, just hanging out with everybody and the positive energy and thrill that comes with the competition,” Taylor said.

Geibel and Battaglia will move on to compete at the national competition in April. Originally this event would have taken place in Anaheim, Ca., but due to COVID-19 and social distancing restrictions, this event will also be held virtually.

“The most disappointing thing about not being able to go to Nationals is that I miss out on a trip to California, which I was really excited about, Geibel said.

Along with the individuals that competed at States and that are moving on to Nationals, Joshua Pail was installed as the newly elected District 2 Representative of PA DECA. Pail is responsible for leading District 2 for the next following year. He is in charge of different school DECA chapters like North Allegheny, Chartiers Valley, PA Cyber and the Beaver County Career and Technology Center.

“When I found out that I was elected District 2 Rep. I was overwhelmed to say the least. I didn’t know what to think because I was so happy that I won,” Pail said, “I can’t wait to take on the task of being a state officer.”

Some of Pail’s responsibilities as being a state officer is to make sure District 2 is on track for success. He also is responsible for planning the National DECA Event (ICDU) and other smaller leadership roles.

“I think everyone did a great job this year, the entirety of PA DECA put in so much time to try and make it as fun as possible. I think within our chapter, our members did a great job by staying focused and getting things done even though there weren’t many incentives this year,” Taylor said.