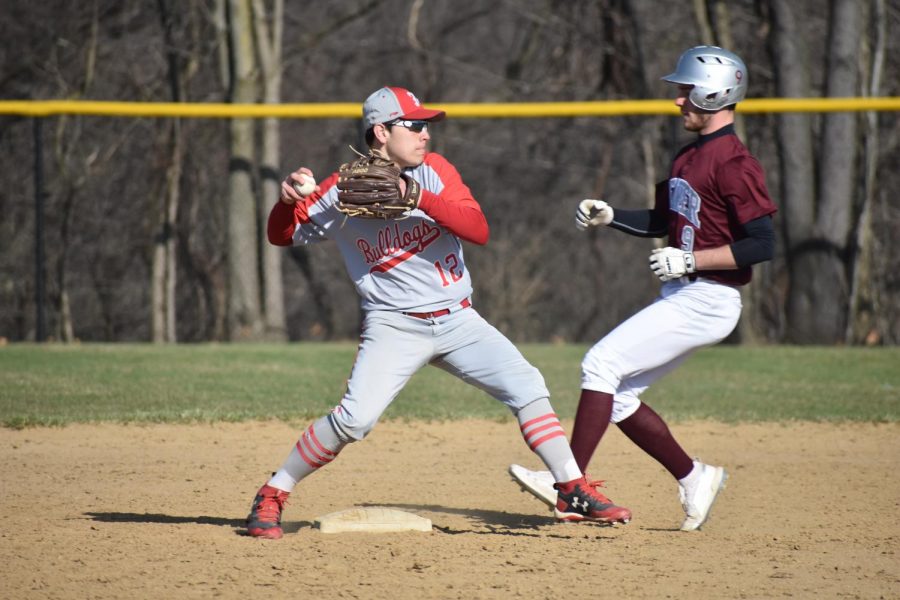 Then-junior Jacob Bauman tags second base before throwing the ball to first base in an attempt to make a double play against Beaver on April 9, 2019.

Last season, the baseball team ended their regular season with a record of 9-9, placing third in the section. While they made it to the playoff, they ended up losing in the first round against Waynesburg Central. This season, the team hoped to improve their record and have a winning season. However, with the cancellation of all spring sports due to the outbreak of coronavirus, things have started to seem a little bleak.

In order to prepare for the new season, the team had been working hard in order to get into shape. Due to the bad weather in the months of January and February, the team had been primarily practicing indoors to prepare for the upcoming season. However, during the times of good weather, the team practiced outside on the baseball field or on the turf field. One new thing the team did this year was travel to Pure Edge in Wexford, Pa., which is a performance training facility, where the team held some practice sessions.

However, before the team’s first game of the regular season against Rochester on March 20, all schools in the state were ordered to shut down in response to the outbreak of the coronavirus. This meant that all of the baseball games had to be postponed until the schools could be opened again after at least two weeks.

With this postponement, the team would have to wait to play their first regular season game. The season could be cancelled if the outbreak is not slowed down or something is done to stop the spread of coronavirus.

“I am very upset that the season is postponed. I didn’t play last year, so I was really looking forward to playing this year, especially after working hard during practice. I hope that all of this is just short-term,” Colaric said.

The team must wait until the quarantine is lifted in order to resume practicing for their season. With the hopes that the season continues, the players all eagerly await the announcement for the continuation of the season.