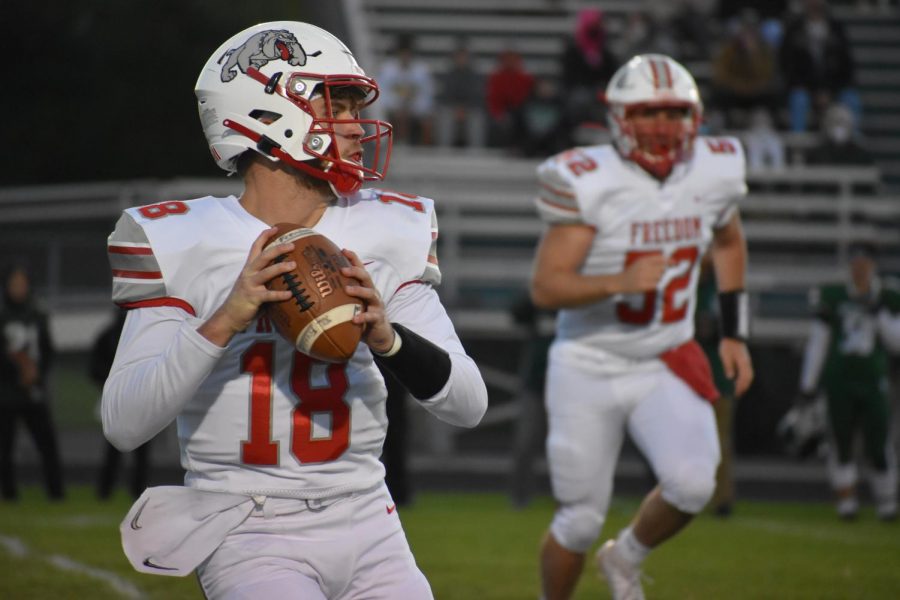 Senior Cole Beck steps back to throw against the Laurel Spartans on Oct. 2.

After a hard fought 21-0 win against the Riverside Vikings, the Freedom Bulldogs improved to 1-1 and looked to continue their momentum throughout the rest of the season.

On Sept. 25, the Bulldogs took on the then 1-1 Neshannock Lancers. The game didn’t start out the way the Bulldogs wanted, when the Lancers forced them to punt on their first drive of the game. The Lancers ran this punt into the end zone to open up the scoring just 4 minutes and 13 seconds into the game. This shifted the early momentum to the Lancers. After this touchdown, both teams held their opposing offense out of the end zone to end the first quarter 7-0.

The Bulldogs then gave up another touchdown later in the second quarter. After this touchdown, the Bulldogs answered back on a 20-yard touchdown by senior Reiker Welling.

The rest of the game, the Bulldogs struggled on defense and gave up five  more touchdowns. However, they were able to score two more touchdowns, including a 73-yard touchdown catch by Welling. The Bulldogs fell that game 54-20.

The following week, the Bulldogs traveled to play the Laurel Spartans for the Bulldogs’ fourth game of the season.   The game started out with great defense by both teams, but with under two minutes left in the half, the Spartans opened up the scoring with a touchdown. After this play, on the ensuing kickoff, junior Josh Pail received the kick and ran 70-yards down the field to the Spartans’ 19-yard line. This set up a first play, 19-yard touchdown catch by Welling to even the game at 7-7. Welling went on to catch another touchdown pass covering 72- yards, which led the Bulldogs to win the game 14-7.

With a record of 2-2, the Bulldogs faced the Ellwood City Wolverines in their Homecoming game. The Bulldogs started strong, scoring 30 points in the first half off of four touchdowns and a safety. They kept the momentum going in the second half with a touchdown catch by junior Tristen Clear halfway through the third quarter, his second of the game. The Bulldogs added another touchdown to their total before the end of the game and won 44-6. After the game, senior David Martsolf said, “That win felt great today, it really felt like we were a family today.” He also added, “Next week against Beaver Falls, we’re are going to have to keep this same energy.”

On Oct. 17 the Bulldogs took on the Beaver Falls Tigers. The Tigers started the game on the run and the Bulldogs were unable to stop them. The Tigers scored two rushing touchdowns in the first quarter. Early in the second quarter, senior Cole Beck ran the ball into the end zone to open the scoring for the Bulldogs. The Tigers quickly scored back just two minutes later and were back up by two touchdowns. On the next drive, Welling picked off the Tigers’ quarterback’s throw to get the ball back. This led to a 4-yard touchdown catch by senior Brett Boyd, right before the end of the quarter. In the second half, the Bulldogs offense was unable to score. On the other hand, the Tigers’ offense went on to score four more touchdowns by the end of the game to win 50-14.

On Friday Oct. 23, the Bulldogs took on the Mohawk Warriors. The game started out with the Warriors scoring a quick touchdown, but the Bulldogs would answer back with 3 straight touchdowns of their own including two  rushing touchdowns by Beck and the score was 20-7. With eight  minutes and 47 seconds left in the second quarter, the game was postponed due to lightning. The game resumed on the next day, Saturday Oct. 24 at 10 a.m. The game picked up right as it had left off with the Warriors having the ball around midfield. The Warriors once again opened up the day with a touchdown on their first drive. The Warriors  scored one more touchdown and the Bulldogs went on to score three more touchdowns by the end of the game with a  final score of 47-20.

The Bulldogs ended the season with a 4-3 section record and just missed the playoffs. They will play an exhibition game against Beaver on Oct. 30, but this will have no effect on their season record and standings. With 16 of the team’s players being seniors, they will look onto next year to grow their young players and continue to grow as a team.