No one should be afraid to love their interests 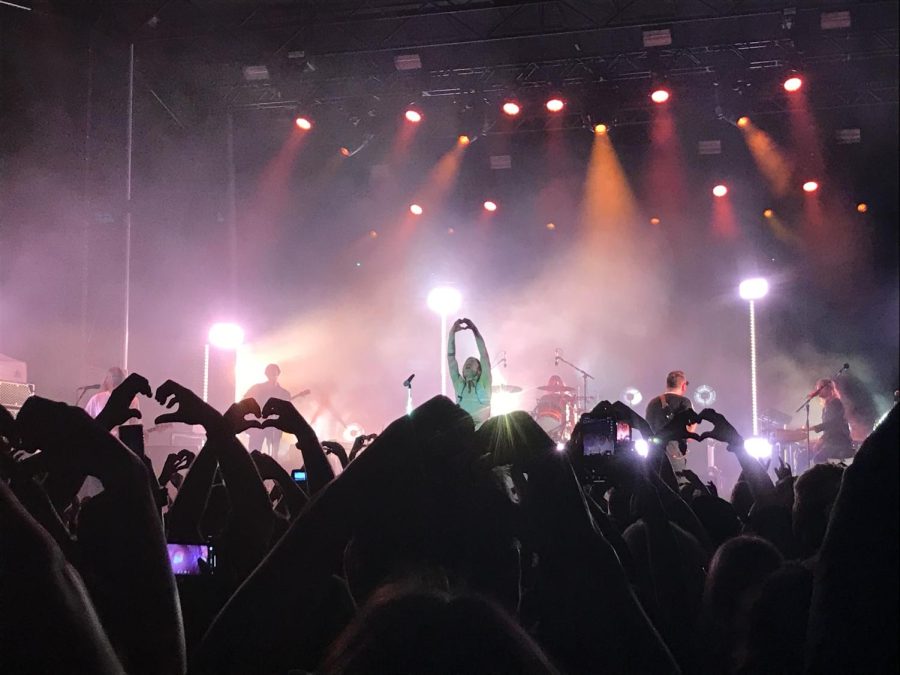 Holding their hands in the air, fans make a heart shape to show their affection for Cage the Elephant. Fans are known for creating a loving environment during concerts, especially when they are allowed to enjoy what they love.

Since the beginning of the music industry, fans have played a crucial role in music culture and its acceptance. Fans control who and what becomes popular, they spread news across the world and do this all with strength in numbers. Even with all the power they hold, fans, and most especially the stereotyped “fangirl,” are condemned to mockery and ridicule. Gender norms take over the music, and the double standard for female teen culture spreads rapidly. The 2022 “fangirl” takes on a whole new meaning when mixed with social media, an intense passion for their artist and the fight against the patriarchal social systems.

The word fandom means the fans of a particular person, team, fictional series etc. that are regarded collectively as a community or subculture. Music fandoms all across the globe come together for a favored artist, and other fandoms join together to support a particular sports team, a love of a book series and so much more.

Fans can be extremely passionate, but with passion can come aggressiveness, and when one fan steps out of line, it can look bad on the whole group. Modern society has tried to suppress female interests in so many ways, and this includes being a fandom. Masculine fandoms are allowed to be universal and looked highly upon, but feminine fandoms are historically disparaged. The stigma around the behavior of females, where the world would rather them be controlled than in “hysteria,” has made interests any woman enjoys less valued. There is a big difference between a screaming fan at a concert, and someone lighting a car on fire in anger after a lost game.

Fangirls have become somewhat of pop culture’s favorite “punchline.” It is easy to make fun of screaming girls who seem to be madly in love with some boy band member with curly brown hair, but it runs deeper than that. Many fangirls attribute artists to the reason they are able to keep going, throughout the day and in general, because music is a way of life for many. Not to mention, when fans put their mind to something, they can do it, whether it be a fan project at a concert, massive streaming rates in one night or even selling out political rallies only to not show up — fans are loyal.

The pandemic brought a number of artists back into the spotlight, one after the other dropping albums and providing fans with tons of content. Social media has allowed fans to grow as a whole, and get news or information to large groups of people at lightspeed. Fans have created a growing acceptance culture within fandoms, which has allowed artists to feel comfortable producing music that feels more “like them.” Respect runs throughout female fandoms, and respect should be expected of anyone who is just enjoying life.

Fans — fangirls especially — deserve to be treated with respect because there is nothing wrong with being passionate. Growing music and pop culture leads to many new groups and developing artists. 2022 is hoped to bring on a new wave of acceptance for all fandoms and artists. Music brings an opportunity for fans to stay afloat in a time when everything felt like it was sinking in the world. When something is a lifeline, it should be admired, not ridiculed. This is the year for change, and for fans to feel comfortable loving what they love.