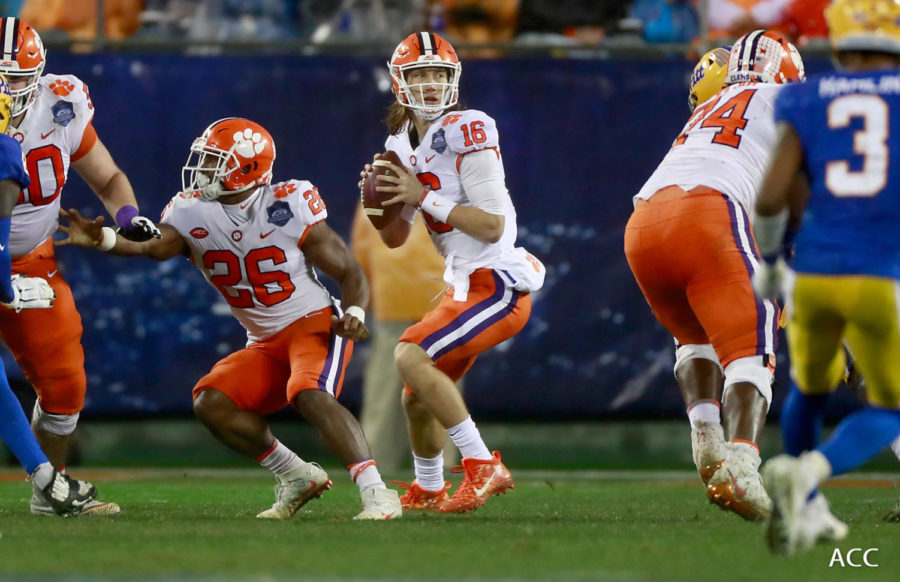 First overall pick Trevor Lawrence looks down the field getting ready to launch the ball to his receiver against Pitt on December 1, 2018, in the ACC Championship.

On Thursday, April 29, the 2021 NFL Draft took place in Cleveland, Ohio. The first round began with the Jacksonville Jaguars choosing Clemson star quarterback, Trevor Lawrence. At Clemson, Lawrence led the Tigers to a 2019 National Championship and an undefeated season.

The Philadelphia Eagles traded up for the 10th pick of the draft, and they selected 2021 Heisman Trophy winner Devonta Smith as they tried to build their offense. This pick reunited Smith with his former Alabama quarterback Jalen Hurts. The next pick was owned by the Chicago Bears. They chose their replacement for Mitchell Trubisky: Ohio State quarterback Justin Fields. Within the next nine picks, three offensive linemen were taken, including Rashon Slater to the Chargers at 13, Alijah Vera-Tucker at 14 to the New York Jets and Alex Leatherwood to the Las Vegas Raiders at 17.

Seven picks later, the Pittsburgh Steelers selected Alabama running back Najee Harris. With the following pick, Clemson running back Travis Etienne was reunited with his college quarterback, Lawrence, in Jacksonville.

The first round of the draft concluded with three straight defensive linemen being selected. These linemen were: Gregory Rousseau to the Buffalo Bills at pick 30, Jayson Oweh to the Baltimore Ravens at 31 and Joe Tryon selected by the Tampa Bay Buccaneers to end the night.

On Friday, April 30, the second round of the draft kicked off with the Jacksonville Jaguars selecting cornerback Tyson Campbell out of Georgia. With the 44th pick of the draft, the Dallas Cowboys selected cornerback Kelvin Joseph. Joseph played college football at Kentucky and will boost the Cowboys seemingly lacking defense. Then, with the 47th pick, the Los Angeles Chargers selected Asante Samuel Jr. He is a cornerback out of Florida State and is the son of former NFL star Asante Samuel Sr.

Many teams including the Jaguars, Bengals, 49ers, Packers and Chiefs used their second round picks to boost their offensive lines to protect their young quarterbacks. With the 55th pick of the draft, the Pittsburgh Steelers selected Pat Friermuth. Friermuth is a young 6’5” tight end out of Penn State. The second round concluded with the Tampa Bay Buccaneers taking Kyle Trask out of Florida. In his final season at Florida, Trask led the team to a 8-2 record, and he was nominated for the Heisman Trophy.

The beginning of the third round saw two quarterbacks coming off the board. These quarterbacks were Kellon Mond and Davis Mills. Later, with the 85th pick of the draft, the Green Bay Packers selected wide receiver Amari Rodgers out of Clemson. Rodgers was a Biletnikoff award finalist in 2020.

The final day of the draft was on May 1. The fourth round began with the Jaguars selecting Jay Tufele, a defensive tackle out of USC. With the 114th pick of the draft, the Atlanta Falcons strengthened their offensive line taking center Drew Dalman out of Stanford.

The fifth round saw the first special teams player taken off the board: Evan McPherson, a kicker from Florida. The fifth round also saw four teams strengthen their tight end positions.

The sixth and seventh rounds of the draft were used by many teams to fill in holes or gain depth in many positions in their lineup. The draft night ended with the Mr. Irrelevant pick of the night where the Tampa Bay Buccaneers selected Grant Stuard, a linebacker out of Houston.

All the young men selected in the draft will look forward to starting their hopefully long and exciting NFL careers, but one of the most interesting stories from the NFL draft weekend came from reigning MVP and veteran quarterback Aaron Rodgers. Aaron Rodgers expressed his disappointment in the Packers organization and their failure to draft an offensive player in the first round. The Packers have only drafted one offensive player in the first round since 2012, and that player was quarterback Jordan Love in last year’s draft. Reports are saying that Aaron Rodgers could go as far as to hold out of the season or even retire if this issue is not resolved or he is traded.