Dribbling into a new season 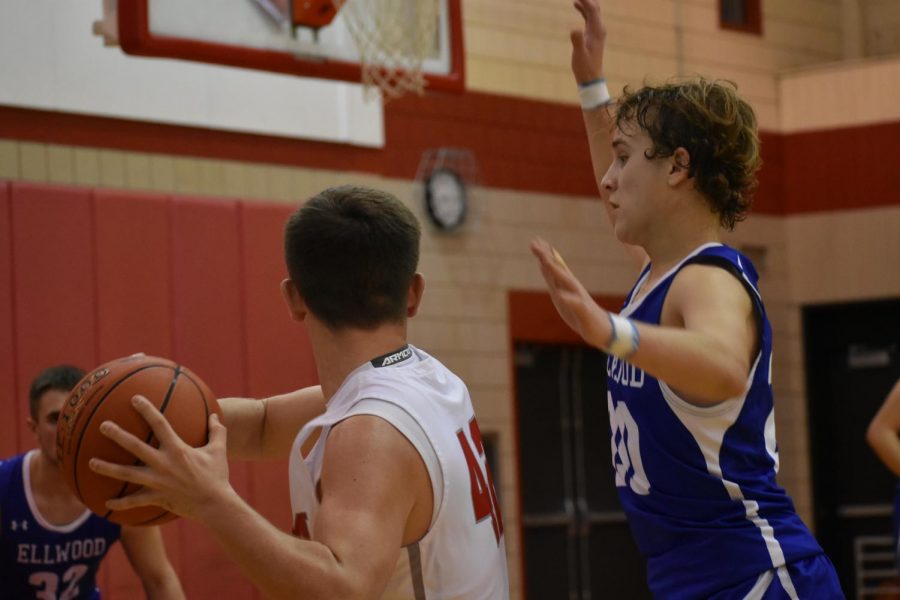 Senior Casey Collins keeps the ball away from the opposing team and looks to pass the ball at varsity’s first home game on Dec. 9.

After its two preseason scrimmages and Mohawk’s tip-off tournament, the boys basketball team starts out its season strong. Preseason games gave the team the chance to work on their teamwork skills, which helped them a great deal in their first few official games. Despite the loss of some key players due to injuries, the boys are as confident as ever as they hit the court this year.

“I feel like our conditioning is good and we are able to make it work but we are definitely looking forward to getting Max and Zane back,” head coach Jeffrey Griffith said.

Until the team gets back all of their injured players, the healthy ones are compensating for them by playing more minutes than they usually would and focusing on working as a team.

The boys defeated Mohawk at their tournament on Dec. 6 with a score of 81-54. Senior Tyler Borgman accumulated the most points that day, with 22 total. However, they fell to Union the next day in overtime on day two of the tournament, with a close score of 60-56. Seniors Borgman and Tyler Mohrbacher, as well as junior Cole Beck, led the team in points throughout their preseason run.

On Dec. 9 the team played their first game on home court against the Ellwood City Wolverines. The game was extremely competitive and close the entire time.

By the end of the first two quarters, Freedom was tied with Ellwood City with a score of 23-23. As the second half began, the game only grew more intense, as did the crowd. The boys were able to keep the ball moving and follow-through with their shots by finishing at the rim. Although they were down by seven going into the fourth, Freedom kept fighting. A number of gravity-defying rebounds from junior Reiker Welling and points from multiple players also helped keep the score neck-and-neck.

“We struggled shooting a little bit in the Ellwood game but we did a lot of other things well,” Griffith said.

As the clock wound down in the fourth, a player for the opposing team managed to make a three-pointer with two seconds remaining , sending both teams tied 53-53 into what would be an eventful overtime. In just four minutes of overtime action, both teams had a multitude of fouls called against them and took a number of timeouts. Freedom managed to stay strong and score some points despite their exhaustion. They were able to hold off Ellwood City from making another comeback and pulled out an exciting 66-60 win against the Wolverines.

“We played great. We care about others before ourselves and that’s all that matters. We all play together and we’re in it for each other,” Welling said in regard to their first home game.

The team also traveled to Beaver on Dec. 11, where they lost 62-52. The boys were able to keep the score close with the Beaver Bobcats, but eventually ten missed foul shots ended up playing a role in their defeat. Freedom also fell to North Catholic 91-42 on Dec. 13. Mohrbacher led the team in points in both games.

Balanced scoring from every team member has made the boys difficult to guard, and a force to be reckoned with as they look to make up for their missed opportunity at playoffs last season. They have shown resilience so far this year, as each player is working their hardest with what they have. The varsity team travels to Carlynton after Christmas break to battle it out on Jan. 3.

“We’re just trying to get better every day and win as many games as possible,” Griffith said.