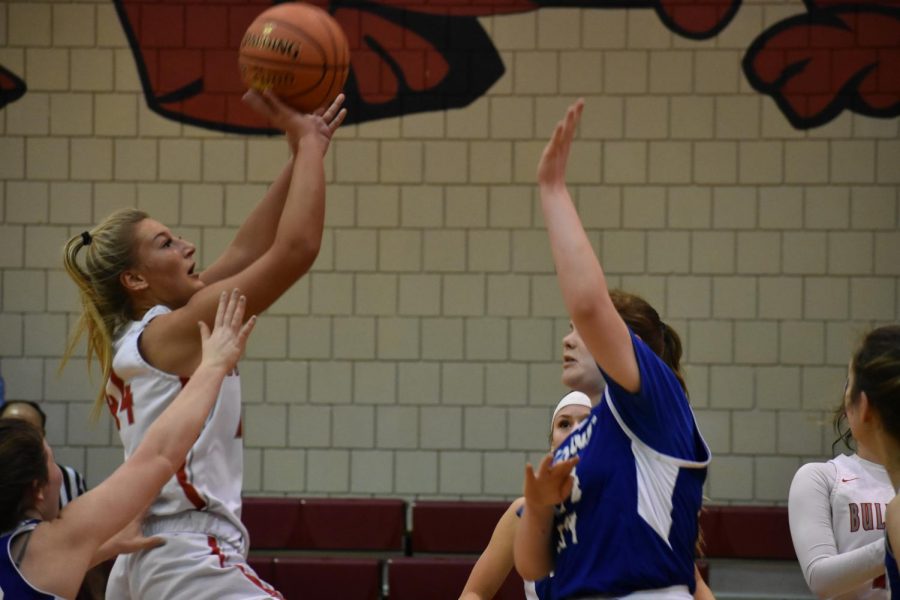 Senior Karissa Mercier jumps up for a shot just before halftime on Jan. 14 against Ellwood City.

After weeks of uncertainty and even a decree from Governor Wolf suspending winter sports until Jan. 4, the girls basketball team is back on the court. Practice resumed immediately after what ended up being a three-week hiatus. The girls played their first game just one week later against Laurel.

This year, the girls’ regular season has not been shortened, but there will be no scrimmages, exhibition games, or weekend tournaments. The girls will have to make the most of the time they have on the court.

Basketball during the pandemic is different for the coaches as well as the players.

“At practice we coach from the sidelines where as in years past we would be on the floor, right in the mix,” Head Coach John Kaercher said. “Coaching games are challenging as I am very loud and vocal, and the players can’t hear the plays being called or the instructions I’m trying to relay.”

The season opener resulted in a loss for the Bulldogs. The team ended up falling to Laurel 49-35 on Jan. 11.

Kaercher saw the game against Laurel was a learning experience.

“We need to do the simple things to be successful,” he said. “We forced them to commit 19 turnovers and couldn’t capitalize on them. We missed 12 uncontested layups which would have resulted in 24 points. We make those, we win.”

The girls bounced back later that week at home, taking a 40-22 win against Ellwood City. on Jan 14. They kept up the momentum with a 45-34 win against Beaver Falls on Jan. 18.

In a Thursday night game, the Bulldogs fell to the section leader North Catholic 65-34 on Jan 21. Kaercher expressed that there was still plenty of room for improvement on the court.

“We also need to be more efficient at the foul line. Shooting 48% on the season so far won’t win you to many bantam basketball games,” Kaercher said.

Overall, however, he was looking forward optimistically.

“Considering we had no scrimmages, exhibition games, and started the season off with the #5 ranked team in 3A, we are now getting into game shape,” Kaercher said.