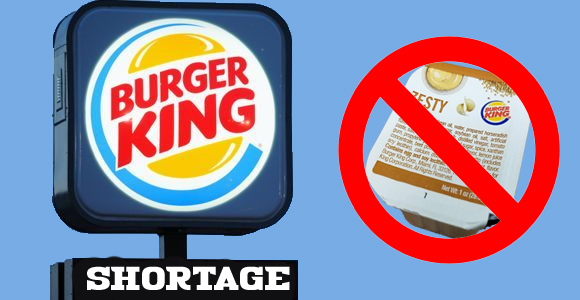 Burger King’s “zesty” dipping sauce production is on hold until the Spring of 2020 due to a worldwide horseradish shortage.

As citizens take a look around society, many will point out that global warming takes a huge impact on our lives. Whether it be from an increase in our average temperatures per year, many will begin to see frost-free season lengthening, more changes in our precipitation patterns and hurricanes strengthening year after year and are causing more damage to the earth.

Global warming not only affects our earth for years to come, but it is affecting simple everyday life tasks. In this case, global warming is affecting the food consumed on a daily basis. Many companies and producers were recently impacted by changes in the weather that we just experienced this fall. This also impacted many favorite fast-food chains, including Burger King, which was impacted pretty heavily. Now these fast-food chains, that many love, are beginning to adjust their menus due to this world-wide problem.

On Nov. 20, Burger King confirmed their famous “zesty” dipping sauce will not be served to customers until (hopefully) the spring of 2020. This popular Burger King dipping sauce is in short demand due to a global horseradish shortage that recently hit. Horseradish is the main ingredient in the production of this spicy sauce and without it, this famous Burger King sauce cannot be made.

The shortage of horseradish has been a concern for many years now, but it has never reached to this extent. This previous fall came with many different weather impacts that shocked many producers. Whether it was from the extensive snowmelt, a wet fall or early frost, it left many companies struggling to pick up their production after a major set back.

A Wisconsin-based company, Silver Spring Foods, is the world’s largest horseradish producer. While many others were affected in the Midwest from the severe weather, Eric Rygg, Silver Spring Foods’ president, did not have the ability to keep their horseradish fresh and healthy for companies like Burger King in order for them to produce products like this sauce.

According to an article from CNN, many horseradish companies struggled with the production of this root vegetable. They explain some precautions they took to avoid this ongoing problem, but nothing fell the way it was supposed to.

“…this year’s weather was a damaging ‘double-whammy’ for horseradish growers.”

The Midwest is not only affected by the growth of horseradish, but similar weather impacts places in Canada and Europe.

While many consumers are blaming Burger King for this shocking news, it is in no way shape or form their fault. The thing consumers should be blaming is global warming, because without the sudden weather changes, Burger King fans would still be getting the “zesty experience” they all love and adore.

Global warming is affecting everyday lives, not only by changing the Earth, but now it has spread to the production of many of our fan’s favorite foods. The span of this shortage continuing throughout the years is unknown, but many producers are beginning to fear for what’s to come.