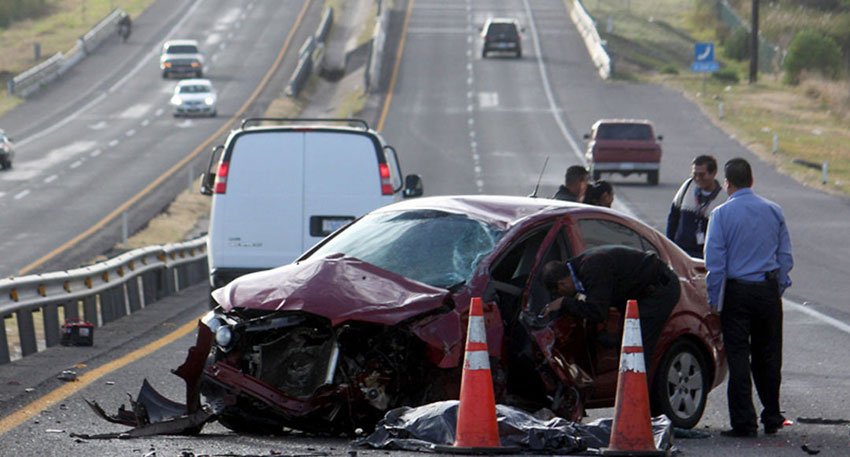 Distractions while driving can lead to life-threatening accidents like the one shown above. Do not put someone else's life at risk by getting distracted while driving.

A car drives off into the distance with two people located inside. One, a passenger, scrolls through their phone, oblivious to the world around them. The other, an experienced driver, reaches for their phone to reply to a recent text message. Both realizing that nobody is paying attention to the road ahead. The car drifts off into the other lane. A mother on her way home from work, her phone put away and focused on the open road, notices a car in the wrong lane speeding towards her. Without hesitation, the mother attempts to avoid the situation by slowing down and screeching the horn, hopefully catching the distracted driver’s attention. Not even a second later, the driver smashes into the mother’s car, reaping not only the mother, but the passenger’s life as well. If only the passenger, and especially the driver, made the decision that their distractions could wait, the driver wouldn’t have to live the rest of their life knowing they stole the lives of two people.

A lot of the time, drivers believe the more experience they acquire driving, or the longer they have driven, determines who is a better driver. In some circumstances this may be the case; however, the better driver should be determined by who is distraction free.

Cell phones aren’t the only cause of distractions on the road. Some examples of distractions can include eating, drinking, changing the radio station, turning on a light and even looking away from the road to adjust the vehicle’s temperature. No matter the age of the driver or how long they have been driving, distractions tempt all sorts of drivers and mainly result in unfortunate events.

In recent technology, vehicle and cell phone companies have attempted to combine modern-day ideas with safer ways of driving. Some different methods include hands-free texting, bluetooth music and even the “Do Not Disturb” option featured in Apple products. However, these “safer” methods still suggest risk during travel, as multitasking is known to decrease productivity down to 40%. From this loss of focus, driver’s fail to pay attention to the task at hand, creating another dangerous scenario.

In today’s society, thanks to cell phones, people also feel the need to obtain instant gratification. With the simple touch of a cell phone, possibilities are endless. From this, people develop low attention spans and shortly become addicted. People constantly feel the need to pick up their phones and check their notifications; is this feeling of “relief” really more important than not only saving someone else’s life, but your own?

When attending the movie theater, before the movie starts, the screen always reminds viewers to put away cell phones since they are a distraction to the movie and others trying to pay attention as well. If one can put away a cell phone during a movie, why not in a vehicle?

Whether it is from being under the influence, talking to your friends, eating a snack, lacking sleep or even for medical reasons, there are many causes of car accidents. As tempting as it is to check the nearest cell phone or change that one song you hate listening to, it is not as valuable as life. It can wait.