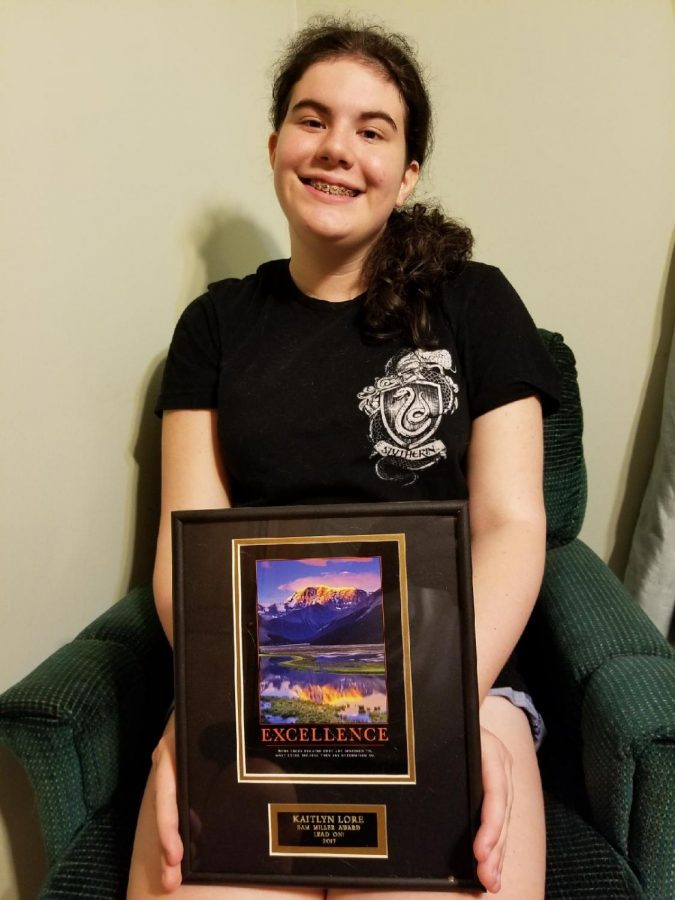 On Aug. 5, junior Kaitlyn Lore was awarded the Sam Miller award, which is given by Bender Consulting Services to those who work to fight bullying and support others in the youth disability community.

This award was established in 2012 by the Bender Consulting Lead On Team, which consists of high school and college students with disabilities. The organization aims to advocate for employment of people with disabilities, self-empowerment and anti-bullying.

This team is part of the Bender Leadership Academy. The program started in 2001 in Delaware and was brought to the Pittsburgh area. With this program, students with disabilities have the opportunity to improve professional development skills through public speaking, résumé building and other workplace essentials.

“These are the attributes of being employable. Many activities of the Bender Leadership Academy range from writing resumes, public speaking to interviewing skills which enable them to be successful in any work place. The objective of the Bender Leadership Academy is building the pipeline of talent with people with disabilities, making the youth today the employees of tomorrow,” Ms. Rita Kaplin said.

This award, sponsored by Bender Consulting Services, honors Sam Miller, a previous member of the Lead On Team. Miller committed suicide in 2011 and was a supporter of the disability community before his death. The award was established a year later in his name.

Under chairman Gerald Homme, the award aims to “recognize a young leader who embodies the mission of the Bender Lead On Team.”

In order to qualify for this award, applicants must be members of the Bender Leadership Academy and be 16-24 years old. To be in the academy, participants would have to have an IEP of any kind and be able to attend classes four times a school year, according to Lore.

Lore, through the Bender Leadership Academy, learns how to be successful through activities such as public speaking and presentations.

“Mrs. Bender and Mrs. Hill were the two people that really helped me realize that I need to stick with this program as it has opened many doors for me,” Lore said of the importance of being in the leadership academy.

During the process of the program, Lore found out about the Sam Miller Award. She filled out an application and sent it in.

Former sponsor of Freedom’s Bender Leadership Academy students, Ms. Ellen Hill pushed Lore to enter the program and Bender’s support is one reason she applied for the award.

After going through the application process, Lore was awarded a plaque and a $300 gift card when she won.

“Kaitlyn exhibits a lot of self-confidence, she respects diversity, she exhibits a positive attitude and initiative, she demonstrates honesty and integrity and she is very articulate. She definitely is the ultimate individual to be the recipient of this award,” Kaplin said of the reasons Lore won this award.

She was honored at the annual Bender Company Picnic and featured on Bender’s radio show, “Disability Matters with Joyce Bender” on Aug. 28.

On the radio show, Lore discussed the increase of bullying on social media and her experience with winning the Sam Miller Award.