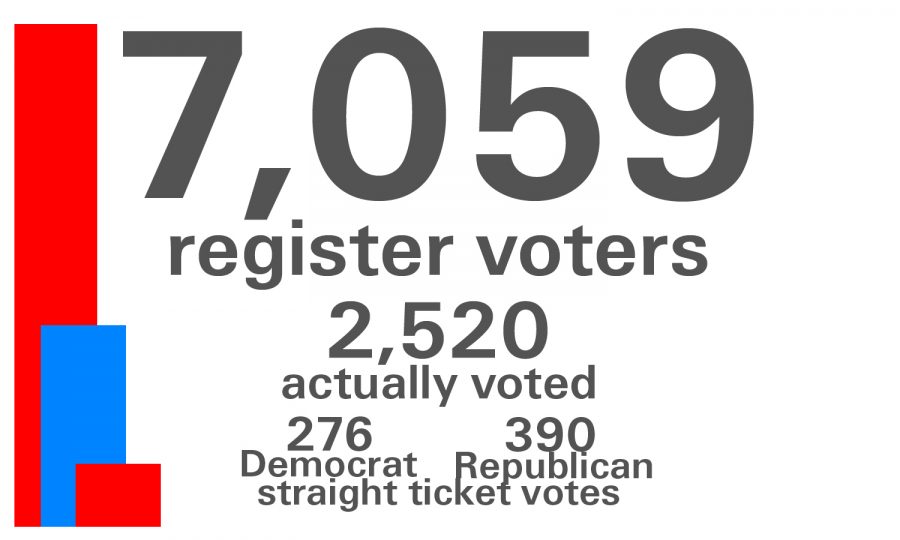 Of the 7,059 citizens registered to in vote Freedom, Conway and New Sewickley, only 2,520 people showed up to vote in the election on Nov. 5. While there may not have been any federal positions up for vote, there were plenty of local offices that needed to be filled.

Freedom has one voting location, Conway has two and New Sewickley has three. All of the locations faced around the same voter turnout, between 29 percent and 45 percent. Freedom had the lowest turnout at 251 of 840 potential voters showing up and the second Conway poll place had the highest turnout of 386 of 859 potential voters. Even though so many are registered to vote, every poll place still sees under 50 percent turnout.

For elections, in the race for the open school board positions, candidates Emily Evans, Gerald S. Inman III, Michelle Micija, Lynn Patsiga, Mary Ann Petcovic and Leslie Rizzi all ran for five open positions on the school board. Candidate Sharon Geibel also ran for the open two-year seat, with no opposition. Due to board member Julia Leindecker not running for another term and Micija being appointed to a vacant seat, five four-year seats were open.

In the end, Evans, Inman, Patsiga, Petcovic and Rizzi all earned a place on the school board with four-year seats and Geibel with a two-year seat. Micija was the only candidate not to earn a place on the board. The new and returning members will begin their terms on Dec. 5 during the annual reorganization meeting, where they will be inaugurated.

Conway and Freedom also had elections for people on the borough council, along with New Sewickley having an election for the township supervisor.

In Conway, candidates Joseph Bohach, Doug Falk, David P. Matthews and Dave Trombetto all ran to be members of the Conway Council for four years. Since there were four positions open, each of the candidates automatically earned a spot on the council.

In Freedom, candidates Louis Armstrong, James Mark Forrest, Dan Baker and William Smith all ran for spots on the Freedom Council for four-year seats. Like the Conway Council, there were four positions open and only four candidates, so each of them automatically earned a spot on the council. Candidate William Smith ran unopposed for a two-year seat, which earning him the seat by default.

In New Sewickley, former township supervisor Greg Happ stepped down, allowing for someone new to take his place. In the election, Republican Douglas Martin defeated Democrat Al Horn with a total vote of 1047-633, which means that Martin will be the next supervisor for New Sewickley.

While a lot of the elections this year were mainly on a local level, part of next year’s election will be the presidential election, in which President Donald Trump will run against the victorious Democrat who wins the primaries in early 2020. The next election for Pennsylvania is the state and federal primaries, which will be on April 28, 2020.