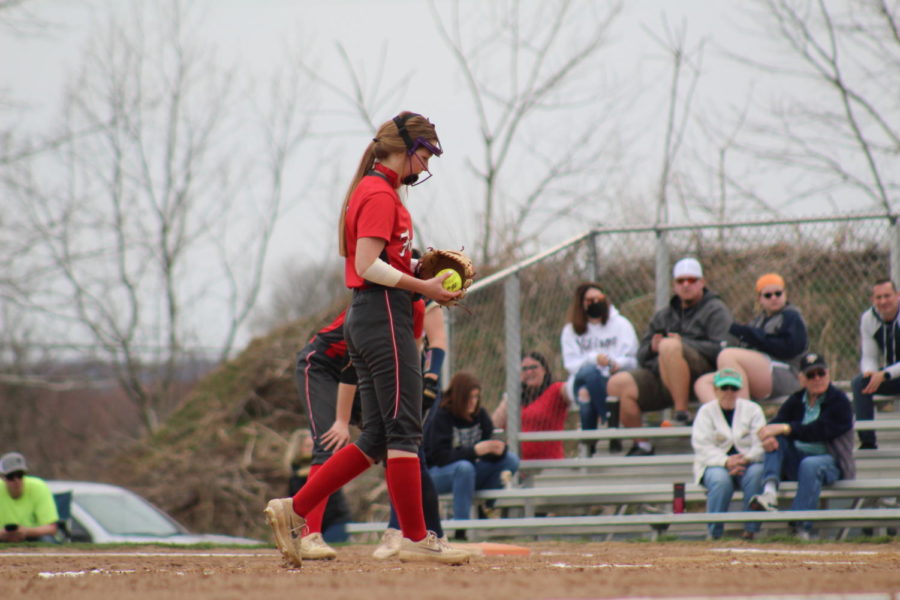 Stepping into the circle, sophomore Leyasa Young prepares to deliver a pitch in a game against Hopewell on March 27.

On May 11, the girls had played against the New Brighton Lions and had achieved a win against them by 13-2. Their hard work had paid off with that win being their first win since the beginning of April. They played again on May 12 against the Riverside Panthers and fell to them 7-11.

“Our team had a rough season and took many losses but we all tried our best and worked hard so I’m not upset about this year’s season,” senior Erica Gazdik said.

“Being a senior on the team was a responsibility. You had to be a leader and encourage others. Time flew by, and I was a senior before I knew it,” senior Olivia Shaffer said.

Seniors on the girl’s softball team include Gazdik, Shaffer, Haley Scheck and Tara Speicher. Having such a small team this year, the seniors were able to be leaders to the other seven players. Each of the four girls have been playing softball their entire high school career, so finishing their season this year was an emotional moment for them.

“Some challenges we faced this season was simply not winning, from maybe getting a late start on hitting or a good start to the game but not finishing strong, which caused us not to win games,” Gazdik said.

The team had faced many challenges during the season, causing them to fall to 14 games. Being a small team it could be complicated at times to overcome challenges, but the girls had successfully completed their season. Despite losing a game they still worked their hardest and continued pushing themselves and each other forward.

“My favorite memory from being on the team was my sophomore year when we were the only softball team in Freedom history to make it to states,” Shaffer said.

In the spring of 2019, the varsity girl’s softball team was the only softball team in Freedom history to make it to WPIAL (Western Pennsylvania Interscholastic Athletic League) and then qualified for states. For multiple girls on the team, that was an extremely memorable moment for them to be able to be a part of the team and experience that.

“I’m still thankful for the experience and the friendships I made this year on the team,” Gazdik said.

Being a part of a team bonds together many people and being able to be together like that during games and practices can bring people together. Seniors were able to experience this their entire high school career, but after completing their season now won’t get to experience that any longer

Even after a rough season, the girls pushed themselves through it all and successfully accomplished their 2021 season.