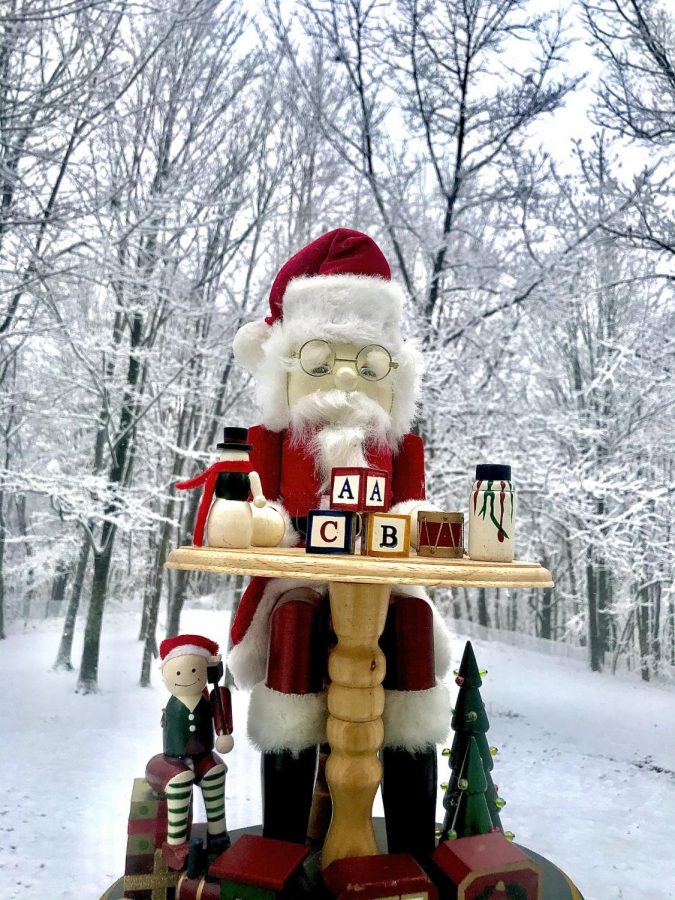 Many people all around America decorate their houses with various types of decorations, including Santa figurines.

It’s that special time of year when families everywhere start pulling out their dusty bins of Christmas decorations and participate in traditions. Every year Grandpa Earl makes a dreaded fruitcake to bring to his family. His grandchildren pretend to eat it, but they actually slip it under the table to the dog. Aunt Carla pulls out her annual Christmas lights and drapes her house in thousands of lights. Little Sally sings “Silent Night” in the school choir with frequent voice cracks. These are examples of Christmas traditions, but why are they traditions? Some Christmas traditions are perceived as normal, but after thinking about them, they are honestly strange.

Let’s start off with the old, fat man in a red suit who is known as Santa Claus. It doesn’t really make sense why an old dude is such a popular tradition, or even an idol to children. The idea of it is strange, but many people don’t realize this. According to History.com, Santa originated from a monk named St. Nicholas who lived back around 280 A.D. Dutch families gathered to honor his death and called him “Sinter Klaas” for short, and soon American culture picked him up. Clement Clarke Moore’s poem “Twas the Night Before Christmas” that was written in 1822, spread the idea of Santa even further. Now, Santa is the jolly, fat man that goes from house to house on an expedition with his pack of flying reindeer delivering gifts to children. Nevertheless, Santa brings joy to many children and makes Christmas magical for them.

“I do not believe it is weird for Santa to be a Christmas tradition because he brings little kids lots of joy around the holidays, and he has always been around so he is just normal by now. I feel like Christmas might be a little boring for kids if they didn’t have Santa to look forward to. I think he adds the perfect amount of ‘Christmas Magic’ for the kids to enjoy having him come around every year,” sophomore Madison Sanders said.

Thinking of fruitcake probably doesn’t bring back delightful memories of a great taste. In fact, many people hate fruitcake. The Huffington Post even went as far as to say fruit cake is one of the most hated cakes in the existence of baking. Some people have never even had it, they just know its bad reputation. So why is fruitcake a Christmas tradition if no one really likes it? According to the Daily Meal, fruitcake dates back to the Romans who called the cake “satura.” America got the fruitcake tradition from British tradition who called fruitcake “Christmas cake” or “plum cake.”

“I do not know anyone that likes fruitcake. The first 3 words that come to my mind when I think of fruitcake are gross, strawberry and blueberry. Eating fruitcake might still be a tradition because people have eaten it for so long, so now people feel like they should eat it,” freshman Emma Falk said.

It’s not unknown to have Buzz Lightyear, a pickle or other characters and things dangling from Christmas trees. It is a tradition to hang random things up on Christmas trees, but it is also strange. Buzz might be a child’s favorite, but he also has nothing to do with Christmas. Some people choose not to decorate with characters, and instead use circular more basic ornaments. Either way, why is hanging random things on Christmas trees a tradition? According to Culture Trip, this tradition was said to be started by Germans in the 16th century. The Germans would decorate small evergreen trees for church plays and call them “Paradise trees.” The idea of decorating trees was spread throughout Europe, and immigrants brought Christmas trees to America in the 18th and 19th centuries. Soon American companies were selling ornaments, and in 1973, Hallmark released their “Keepsake” ornaments. Today, ornaments can be found in all shapes and sizes even if they have no relation to Christmas.

“I don’t think it’s weird to hang random things, people can put ornaments on their tree even if they don’t have a relation to Christmas. I think the weirdest ornament I put on my tree is a Santa in swim trunks playing a ukulele,” sophomore Troy Pawlowski said.

All in all, Christmas would be very different without some of these classic traditions. While Santa is strange in a way, he is also something kids can look forward to. Maybe fruitcake is gross, but it is also fun for neighbors to pass around the dreaded cake in hopes to get rid of it. Sure random things seem like they don’t belong on a tree, but maybe these random ornaments belong in each person’s heart and remind them of their childhood.