The circle of life

Wildlife population has been declining for past 40 years

Living wildlife is an important part of maintaining an ecosystem. Without the wildlife following their own circle of life, ecosystems would start to fail.

Since around 1970, the population of wildlife has declined 60 percent, as found by a report by the World Wildlife Fund (WWF). The decline of wildlife is a result of humans destroying shelters, food sources and polluting water. Plastic and trash is suffocating ocean wildlife.

“Wildlife decline is due largely to human impact. We destroy habitat in mass, pollute without hesitation, and basically treat our earth as a single use object. There is so much that can be done to help with wildlife population decline. Simple acts such as not using single use plastics and plastic bags will make a huge difference in the long run,” middle school science teacher Jeanine Ging said.

Pollution is a problem that is leading to the destruction of the natural world. Humankind needs to preserve the lives of animals especially since the wildlife creates a better ecosystem to live in.

For example, without snakes, the population of mice and rats would skyrocket. Without sharks, species diversity would be non-existent and sharks indirectly impact the health of the coral and seagrass beds. Every wild, living creature leaves a major impact on the Earth and those impacts affect how humans live.

“It may seem contradictive, but I think a lot of people are intentionally harming wildlife without even knowing it. Maybe they are destroying the land and area the wildlife inhabits to ensure there are areas for buildings/homes. Even invasive species, are brought into an area because someone thought they looked nice, or would be beneficial. But they maybe didn’t think of the long-term effects the organism would have, or the effects it would produce for other wildlife,” Homa said.

Because many people are scared of wild animals, they refuse to help them continue to live in safe, clean ecosystems. However, those animals are living and evolving just like every person, plant or creature evolves.

“I think there is already a lot being done to try and help with population decline. Things such as government regulations on certain products to try and limit the amount of pollution being put into our atmosphere. Even smaller things can help with the decline, such as using reusable products, or finding ways to attract native populations (bus and insects) that can further provide food and shelter to native wildlife in an area,” Homa said.

Ging has spent some of her time volunteering to assist with counting raptors at the Allegheny Front.

“I have volunteered my time over the past few years monitoring raptor migration, banding Northern Saw Whet Owls, and tagging Monarch butterflies. This acts are done to get data on how the populations of birds and butterflies are doing. Our Bald Eagle population is doing well. This is in part to the banning of DDT on crops and acts that protect the Bald Eagle specifically. Most of our other raptor populations have dropped. This is due in part to habitat destruction, wind energy placement, and lead contamination,” Ging said.

Since the beginning of humans, wildlife and humankind have lived in the wild together. Humans hunted and gathered, animals survived as they continue to do now and the wildlife thrived.

“It is human’s carelessness that devastates habitat and endangers wildlife,” Ging said.

The garbage in our ecosystems is damaging to the health of the wildlife. The best thing to do for the wildlife population is to recycle plastic, properly dispose of trash and try to help the environment thrive.

“The decisions that we make in our everyday life can have a large impact in the long run. So think to yourself, ‘Do I really need a plastic bag to carry out one item?’, ‘Can I drink my pop without a plastic straw?’, ‘Can I hunt and fish more responsibly without lead based shot and tackle?’” Gin 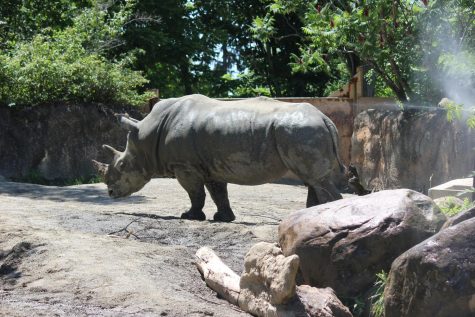 Although, this rhinocero is being held in a zoo, it will never have to deal with the pollution that is causing a population decline in natural ecosystems.