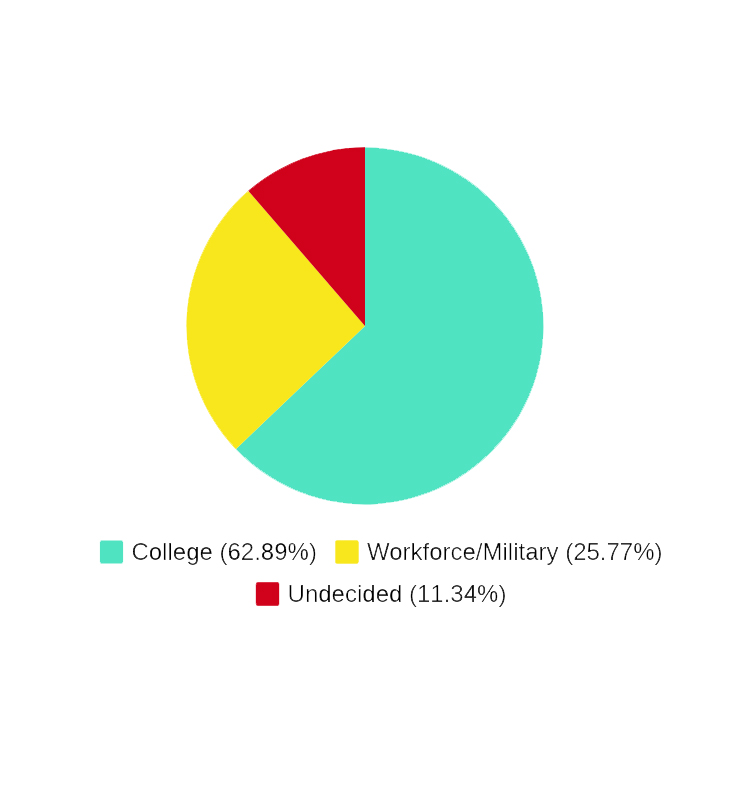 The pie-chart above shows the percentage of senior’s plans after graduation for the class of 2020.

The seniors at Freedom Area High School have a multitude of paths to choose from as they embark on a journey into the rest of their lives after graduation. Some will further their education at a college or university, while others join the workforce, military or attend a trade school.

The Graduation Project has options catering to whichever choice a student makes in regards to their future. There’s a substantial amount of pressure for these seniors to sort out the next portion of their lifespan before graduation.

The differences on paper, between work-bound and college-bound students, as far as project requirements go, is that work bound seniors require two job shadows instead of one. The college-bound seniors also have to tour two college campuses and attend a financial aid meeting.

Preparation for the next step after graduating can be challenging for everyone. If a student is undecided, it’s hard to prepare without any idea of what they want to pursue. The guidance department does their best to meet with every senior to discuss their future plans.

In the past, it was normal to drop out of school and get a job at a fairly young age. At some point, the culture shifted and finishing high school and going to college was well respected. People could secure higher-paying jobs that way. With more trades being in demand though, a bachelor’s degree doesn’t have the same edge it once did in the job market.

While this is true, some people can still have an older mindset that not attending college could make the student look bad, or make one appear less intelligent. This could possibly lead to discouragement or disappointment in their dream career.

It’s important to note that Freedom’s graduation requirements have changed to keep up with the different circumstances for individuals. There’s been quite a bit of fluctuation over the past few years in what was acceptable for a senior project. Those situations helped lead to the development of this year’s project.

Depending on the path they chose reactions from the people around them differed.

“I’ve known since freshman year that I wanted to join the military,” senior Leigha Stewart said.

Stewart plans to join the Air Force after graduating.

“My friends weren’t into the idea, but my family was really supportive,” Stewart said.

For her senior project she will be doing the workforce option, except she’ll be job shadowing at a military base through a family friend.

Black plans to major in Pharmaceutical Science following his graduation. He’s completing the standard college option, much like the majority of his peers.

“My mom also went to college so everyone in my family has supported me,” Black said.

No matter which path a senior chooses their project is completed with a similar amount of hard work. With more students having different career options there might even be room for further adaptation to the project.