Time to circle up 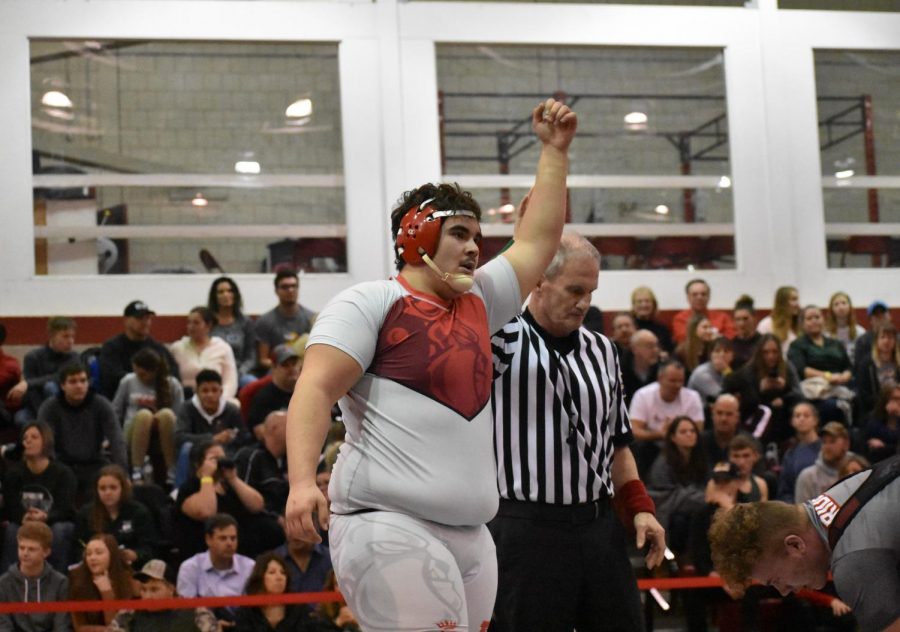 Senior Fernando Franco raises his fist into the air after a match in the bulldog’s gymnasium on Jan. 4-5 in the previous season.

As the weather gets colder, the fall sports are just beginning to wrap up and come to an end. With that, the winter sports are ready to begin. When mats hit the floor and the sweat from young student athletes start to drip onto them, only one sport comes to mind. That’s right, it’s time for wrestling season.

Last season, the boys set the standards high and went out with a bang. During the Mid Atlantic Athletic conference held in the gymnasium on Jan.1 and Jan. 2, four previous wrestlers earned their spot in the Parade of Champions. Also, alumni Zach Ward and Jacob Pail joined the Century club after earning 100 wins. They along with alumni Bryson Miller and juniors Trent Schultheis and Quigly co-op Kenneth Duscheck qualified for states in Hershey. There, Schultheis and Miller placed second in their respective weight classes.

However, individual wrestlers were not the only ones that made some accomplishments. Last season’s team was strong and dominated each team in the county. The team altogether ended their season with a record of 10-6 and qualified for their fourth section championship. Although they fell short of the title, they advanced to the consolation match. They successfully won that match and ended up finishing third in the Class 2A section.

This season’s team has already seen drastic changes. Pail, Ward, Miller, and two other alumni have since graduated, making them no longer a part of the team. So who’s going to step up this year to help the team accomplish the same goals they did last year? More importantly, how is the team going to go further than it has in the past?

The team from last year set some high bars for this year’s team to reach. Overall, this year’s team is up for the challenge. Even though the team lost some strong players, the team is back stronger than ever and ready to win more matches. With the help of head coach Jim Covert, the team is ready to get to the mats and pin their adversaries and they are not going to stop until the match is over. After all, no one knows who will win until the referee raises the hand of the wrestler who has won the match.

The team hopes to improve their record from last year in hopes that they not only get to the section championships again but to win and possibly take the crown in their section as well. On Nov. 27, the team will head to Seneca Valley for a scrimmage. After that, the team will definitely know what’s in store to get ready this season. The first match is in the enemy’s gymnasium at Cannon Mcmillan on Nov. 30 where the team’s record will begin to add up. The wrestlers hope to kick off the 2019-2020 season with a victory. In the end, the wrestlers are back and ready to light up the town one pin at a time.