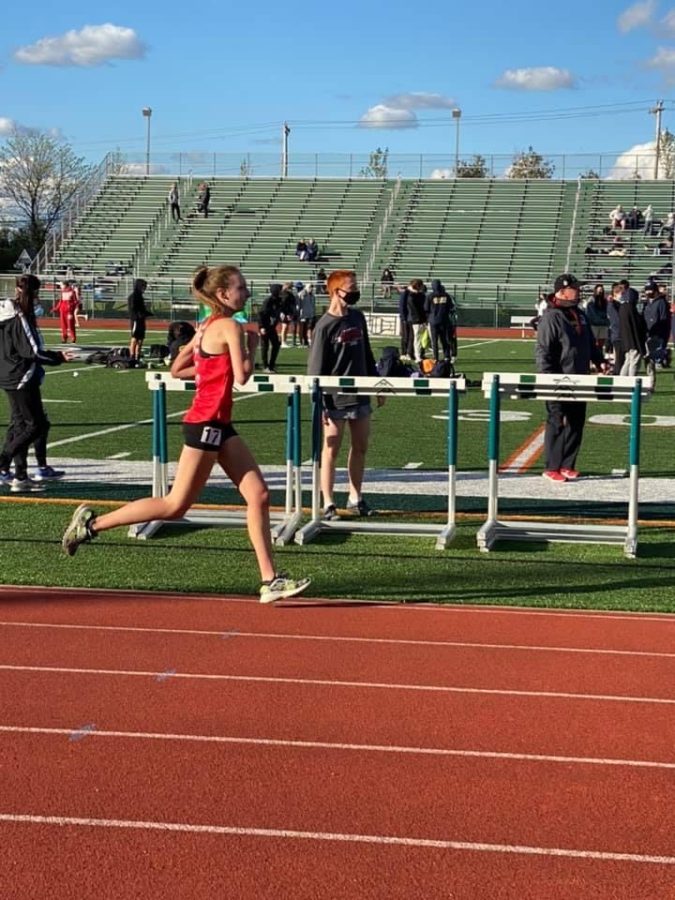 Senior Bailey Roberts set a personal record in the 3200-meter dash at Pine Richland on May 11.

The track and field team has had several successes this year. Many of the meets were full of wins, and many of the individual competitions saw multiple members of the team place. With the overall record for girls being 5-2 and the boys record being 3-3, the whole team has shown great results.

On April 20, the track team headed to Hopewell School District to take on Hopewell’s team, Our Lady of the Sacred Heart (OLSH) and Cornell.

“I think that our track team overall had a pretty great season although it was definitely hard with certain people being out for COVID-19 or injuries, yet when we did have most of our team we definitely competed well and performed well at the meets we had. I think the thing I’m looking forward to the most next year would be trying to get section champs, at least for the girls  side of the team,” Julia Mohrbacher said.

After this meet, all members of the track and field team traveled to the Beaver County invitational on April 28, and only top performers were named. Mohrbacher placed fourth in shot put. Junior Jay Hessler placed fourth in the 400 meter dash. Senior Garrett Paxton placed sixth in the 800 meter dash. While only three people qualified in this meet, the team is proud of those that did.

“I’ll probably most miss being around the team because you get so close with each other during the season that you have fun at practice since everyone can talk to each other and joke around with one another,” Paxton said.

On May 11, the entire team headed to Pine Richland for a qualifying meet for the WPIAL (Western Pennsylvania Interscholastic Athletic League) competitions. Paxton placed sixth in the 800 meter dash. Senior Bailey Roberts hit a personal best at this meet; she completed the 3200 meter dash in 12 minutes and 31 seconds.

“It was really cool to get a personal record in one of my final meets of the year. I always have wanted to end my senior season for both track and cross country on a high note, so I really enjoy getting the opportunity to do this season,” Roberts said.

Many members from the team have qualified to participate in the WPIAL competition that will be taking place at Slippery Rock on May 19.

Six of the boys will be competing in the boys 800 relay. Those who will be participating are senior Colton Heasly, senior Gianni Gagliardi, Paxton, Fricke and Couch.

At the time of writing this, the competition has not taken place and the results are unknown.