Track season finishing up for team events, others advance individually 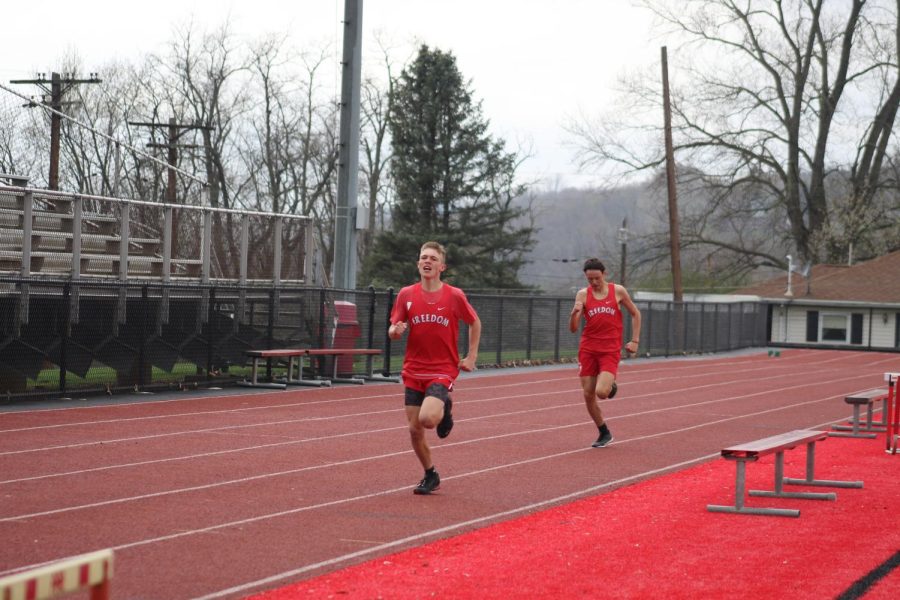 Freshman Jordan Delon [left] and sophomore Jaden Winterhalter [right] round the final stretch as they run the 800 meter.

After a long spring season full of eventful meets, the track and field season is finally coming to a close. May is the last month that the team has meets for the year. With the regular season finished up, it is time for the team to take a more individual route with invitationals and the Western Pennsylvania Interscholastic Athletic League (WPIAL) meets. Individuals this season achieved personal records throughout the spring and continue to better themselves for the next season.

On May 10, the track team traveled to Pine Richland for their last chance meet. This meet was the last of the regular season and the last chance for some to qualify for WPIALs. Many schools from around the area met, and the Bulldogs took on many outside competitors from other schools to fight for a seat in the WPIALs.

The individuals who qualified for the WPIAL track meet as of May 9, their events and places are: sophomore James Couch at 20th for the 3200, junior Trenton Heasley at 14th for discus, sophomore Jaden Winterhalter tied at 15th for the high jump, senior Joshua Pail at 5th for the pole vault, the 4×800 boys relay team in 14th, sophomore Shaye Bailey at 11th for the 100 and 9th in the 200, freshman Aurea Hickenboth at 9th in the pole vault, junior Finley Paxton at 13th in the 800, and junior Julia Mohrbacher at 15th in shot put and the 4×100 girls relay team in 16th.

One of the final WPIAL meets at the end of the season was on May 18. Individuals in the top 16 of their specific fields were invited to this WPIAL individuals meet, which was held at Slippery Rock University. The representatives from the track team that went competed to the best of their ability and were striving for a place and title.

“I’m excited to get out there and prove what our team can accomplish. We have always been the underdogs and that’s where we like to be. We have prepared for this all season, and we have grinded it out all season for this,” junior Colin Fricke said.

Fricke participated in the 400-meter sprint and the 4×800 this season.

With the season wrapping up, students look back on their time as a team and important moments.

“My favorite part of track season was naming the shot puts for throwing. We had a gold one named Bethany and a silver one named Jenny,” junior Megan Evans said.

She participated in the shot put, discus and javelin throwing events.

Through a season of ups and downs, each person on the team bettered themselves and beat their own records. They worked hard all season to be the best that they could be in their field and overcame the challenges of keeping up with the sport that faced them. The coaches and underclassmen players are looking forward to next year’s season with anticipation of great achievements to come.