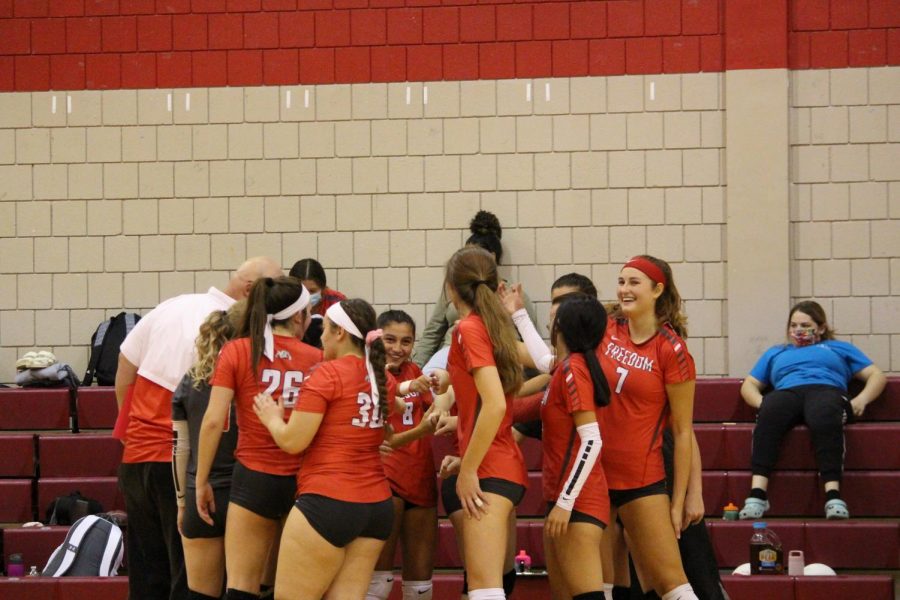 Volleyball team celebrates after starting off their game against Laurel strong on Oct. 8.

With only a few more games in the season, the Freedom Volleyball Team is looking to have a strong rest of the season. Winning against Beaver Falls was a breath of fresh air for the team after having a rough start this month. So far the team has won 2 games.

At the beginning of the month, a member of the volleyball team tested positive for COVID-19. This put the whole season in jeopardy. A decision was made to continue the season by first quarantining and then returning to play volleyball. After the volleyball team quarantined for 10 days, their first game back was against Mohawk.

“I would say considering the fact that we didn’t have the practices throughout the week and over the weekend we played really well against them,” senior Madison Lewis said.

After the Mohawk game, the team went on to play their next home game against Laurel. The team fought hard and strong but ended up losing the game.

Junior outside hitter, Sara Mengel, was 2A player of the week awarded by the Western Pennsylvania Coaches Association.

“To me, being player of the week is really an honor. After all the years I’ve put into volleyball, getting recognized for my playing abilities makes me feel a sense of accomplishment,” Mengel said.

Losing seniors will be hard. The team will be losing Lewis, Emily Ostrowski, Alexis Surenda, Erin Harp and Angel Clinkscales. Along with losing players, the team will also, of course, be gaining new players.

“I feel like we will do good against the other teams next year. I know a lot of the teams were made up of their seniors, and I know there are a lot of truly talented underclassmen. We will truly miss our seniors this year,” sophomore Journey Welling said.

The team leaves this season with memories that they will fondly look back at for years to come.

“Getting closer with all the girls. Especially the girls in the grades below me because I feel like in previous years people have been stuck hanging out with people in their grade, but this year have been able to go out to eat even with all the restrictions we have figured out a way to go out together,” Lewis said after being asked about her favorite thing about this season.

“One of my favorite memories from the season would be when we scrimmaged Eden Christian. Everyone played extremely well, and we all had so much energy and drive. We lost the game but it felt like a win to us,” Welling said.

Altogether, the volleyball team has been through it all this month. After 10 days of quarantining, the team had to work hard to get back on track. The seniors of the team are getting ready to say goodbye to Freedom Volleyball. The season may be ending but the memories that have been made will last a lifetime. Most of the seniors have been playing and growing with their team for four years, and Freedom Volleyball has been a huge part of their lives.