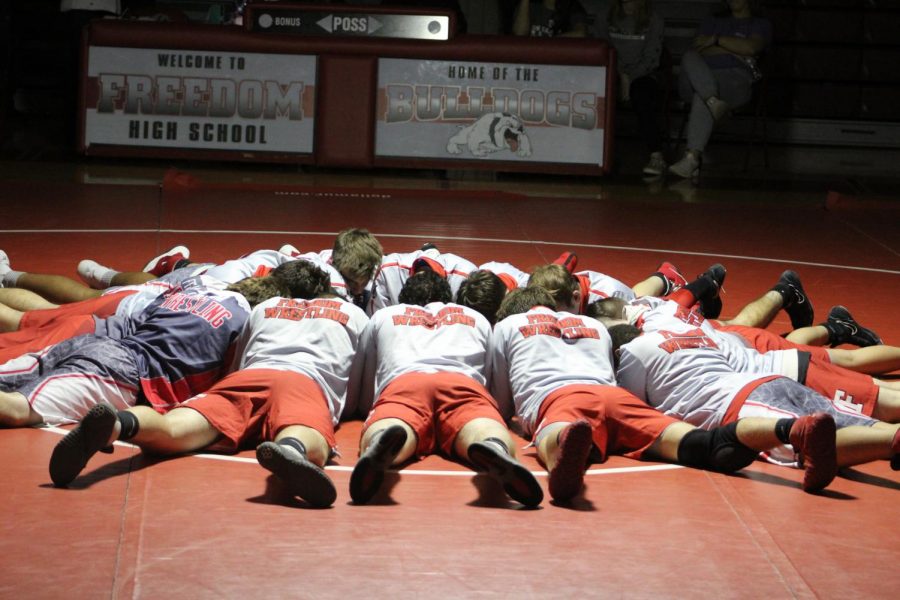 The wrestlers circle up in the middle of the matt to get themselves ready before their match on Dec. 13.

As the weather outside gets colder and the gymnasium fills with more people, winter sports are finally in season. This means that the varsity wrestling team is officially back on the mats and in action. It’s time to see if all of the hard work the boys made will finally pay off.

The team traveled to Blackhawk on Dec. 11 where their first official match would take place. Juniors Trent Shultheis and Ethan Wolfe both gained 12 points for the Bulldogs with pins. The Bulldogs defeated the Cougars with a final score of 48-21. With that match under their belt, everything started to look up for the wrestlers as they gain their first victory of the season.

The next two matches were both held on Dec. 13 in the bulldog’s gymnasium against the Laurel Spartans and the Butler Tornados. After winning against Blackhawk two days before, the wrestlers had high hopes. They first went up against the Spartans. The Bulldogs were off to a rough start but ended strong with a pin from Shultheis and a match win for junior Jalen Foster. However, the Bulldogs still fell to the Spartans with a score of 48-24.

Hoping to show some improvement, the boys then competed against the Tornados right after Laurel. The boys began strong with two early pins from freshmen Matthew Shultheis and Trent McCray, putting up 12 points total for the boys. However, the rest of the match didn’t go as expected as the wrestlers only gained 6 more points before the end. The Tornados ended up defeating the Bulldogs with a score of 54-18.

“[The match] didn’t go as planned. It was a tough night for the whole team. We just need to work harder as a team and have more confidence,” Wolfe said.

With these three matches already over with, the boys are not off to the start that they would’ve hoped for. However, two losses on the record are not going to stop the wrestlers from doing the best that they can.

“Everyone is working hard and improving well. We still have things to improve on and continue to work hard,” Wolfe said.

Upon returning from winter break, the boys will be back in action through Jan. 3-4 when they travel to Ambridge for the MAC tournament. Then they will face the Ellwood City Wolverines away at their gymnasium on Jan. 8 with more ferocity and determination than before to start winning the matches that they know they can win.